December 1 is recognized as World AIDS Day, a day to raise awareness of acquired immunodeficiency syndrome (AIDS) and human immunodeficiency virus (HIV), the virus that causes AIDS. It is also a day to remember the people who have died from AIDS. World AIDS Day was founded in 1988 by two public information officers at the World Health Organization (WHO) to bring awareness to global public health issues. Global agencies and organizations come together each year to focus on a theme for preventing new HIV infections and raising awareness of issues that need to be addressed. This year’s theme, Equalize, aims to shed light on inequalities contributing to HIV remaining a global public health concern. Critically, with the scientific advances in pre- and post-exposure prophylactics, medication is available to prevent the acquisition and spread of the disease, but access to these drugs is not equal.

The U.S. Centers for Disease Control and Prevention (CDC) first reported what is currently known as AIDS in a Morbidity and Mortality Weekly Report (MMWR) on June 5, 1981, titled “Pneumocystis Pneumonia — Los Angeles.” The report described five self-identified homosexual men from Los Angeles with severe fungal infections of their lungs most often seen in people with weakened immune systems. Almost a month later, another MMWR reported Kaposi’s Sarcoma, a rare type of cancer, among homosexual men in New York and California. The report also described additional Pneumocystis pneumonia cases among homosexual men in California, some of whom were also diagnosed with Kaposi’s Sarcoma. Unfortunately, the disease had no official name, and little information about it was known at the beginning of the epidemic.

Researchers first termed the disease GRID, which stands for gay-related immune deficiency, because it appeared in homosexual men. However, the public referred to it as the “Gay Cancer” for the same reason. On September 24, 1982, CDC officially named the disease “AIDS” in MMWR and reported 593 diagnosed cases between June 1981 and September 1982. As time went on, AIDS was also diagnosed among people who used injection drugs, received blood transfusions, heterosexual women, and newborn babies. Many people were concerned and scared to be around people with HIV or AIDS out of fear of contracting the disease themselves. Almost two years after the start of the epidemic, CDC published another MMWR stating how HIV is and is not transmitted. The Surgeon General’s Report on AIDS in 1986 clearly stated that HIV does not spread from one person to another through casual contact. (For a complete timeline of HIV and AIDS, visit CDC’s National Prevention Information Network website.)

When a person contracts HIV, the virus attacks his/her/their immune system and prevents him/her/them from fighting infections. CDC’s most recent estimates of people living with HIV are approximately 38 million worldwide and over 1 million in the United States. These numbers might not include the true number of people newly diagnosed with HIV because COVID-19 limited access to testing for some people. 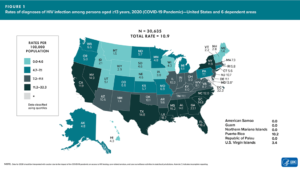 When left untreated, HIV can develop into AIDS. HIV affects CD4 cells, which help the immune system fight infections. When a person has fewer than 200 CD4 cells or a CD4 percentage less than 14%, they receive an AIDS diagnosis. People with AIDS become vulnerable to other diseases, called opportunistic infections. These types of infections are more severe among people with AIDS because their immune systems are too weak to fight them. As a result of opportunistic infections and no, or limited treatment available, many people who contracted AIDS early in the epidemic died. To date, CDC estimates that the number of deaths from AIDS worldwide is approximately 36.3 million. The National AIDS Memorial and the AIDS Memorial Quilt honor the many lives lost to AIDS in the United States.

Luckily, there have been significant medical advances to prevent HIV infections and treat those living with HIV. One of the many scientific advances includes pre-exposure prophylaxis or PrEP for short. PrEP is an oral pill taken daily to help reduce the risk of HIV infection. There is also an injectable form of PrEP that is administered once every other month. In a study published in AIDS, researchers found that PrEP reduced the risk of HIV infection by 70% when taken regularly. The same report also found that the overall risk of experiencing severe side effects was low, making it both safe and effective.

Although it is increasing, the number of people prescribed PrEP has not been high. A study published in Annals of Epidemiology in 2018 found few clinics can provide PrEP, and those that can are not easily accessible to people who could benefit from PrEP, including people living in poverty, without health insurance, and who identify as Black/African American or Hispanic/Latino. These barriers were most prominent in the South, where new HIV diagnoses are also highest.

For this World AIDS Day, we must address inequalities that prevent people from getting tested and receiving prevention and treatment resources. Some of these barriers include access to insurance, transportation, testing, medication, and needle exchange programs. Some people living with HIV or AIDS might also experience a lack of familial or social support. There are several resources available that people might not know about that address some of these barriers, including The Ryan White HIV/AIDS Program and Gilead’s financial assistance programs for PrEP. You can also find HIV testing locations and PrEP providers on the CDC’s Division of HIV Prevention website.

We are no longer living in a world where HIV is “gay cancer” or a death sentence like it was in the 1980s. Science and years of research have discovered ways to prevent, treat, and manage HIV infections. Science has allowed people living with HIV to live longer, healthier lives. Science has created PrEP and post-exposure prophylaxis, or PEP, that can prevent HIV infections in people exposed to the virus. Science has allowed people living with HIV and receiving treatment to suppress the amount of HIV virus to undetectable levels so they cannot transmit the virus. This is also known as treatment as prevention or U=U.

For more information about World AIDS Day and how you can help, please visit UNAIDS’ World AIDS Day website. Speak to your healthcare provider if you think PrEP or PEP might be right for you, and don’t forget about safe sex practices, such as using condoms, to prevent HIV and other sexually transmitted infections (STIs).

Clients who need to contact Karna regarding a current or potential contract can send email to info@karna.com or use our Contact Form.